Aboriginal Workman Not Revealed in Artifacts Found on Silverbell Road 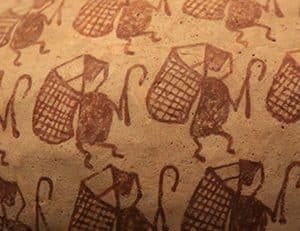 “That a race of Romans fought to carve out an empire in Southern Arizona many centuries ago or that some other pre-Columbian people of European descent lived here, as was hinted five years ago when crosses, swords and spears of lead were found just off the Silverbell road, eight miles from Tucson, have been definitely discredited by Dr. Byron Cummings, director of the University of Arizona’s Department of Archaeology.

“The conclusions of Dr. Cummings agree in general with those derived by the Tucson Daily Citizen in a series of interviews and articles published following discovery of the alleged artifacts.

“Dr. Cummings indicates that the artifacts in no sense conform to previous expectations. They are too heavy for combat, made evidently from some rasp, the inscriptions in Latin have no coherent meaning and no other signs of occupation were found nearby. These are the reasons for doubt as summed up in a report submitted to Dr. H. L. Shantz, president of the University of Arizona.

“The objects which would appear to be objects of aboriginal workmanship were found by T. W. Bent and Charles E. Manier in September, 1924, and the university was loaned the artifacts with the understanding that purchase would be considered. Dr. Cumming’s report given as purchase was being contemplated. No reflection whatsoever was cast by the report on the finders of the artifacts.

“The articles found would seem to indicate the presence in this region of a band of Europeans previous to the coming of the Spaniards in 1539 and 1540,” says Dr. Cummings’ report, in part. “The articles with one exception are crosses and weapons. This exception is a peculiar fan-shaped plate of lead carved on both sides and one side showing a strange geometric design that has its counterpart on several of the other articles. The swords and spears are mostly broken and two pieces show that they have been hammered on the end by some implement like a rasp. Lead is a poor material for weapons, and the hacks and nicks on the swords do not look as though they had been made in combat.

“These articles were not in a cache, they were scattered over quite an area. If they were brought there by flood at the same time the rock, sand and gravel was brought down from the higher benches of the Tucson mountains. Then they were deposited some time before 560 A.D. The earliest date in any of the inscriptions. The articles themselves and the conditions under which they were found do not seem in harmony with any events our imagination can picture.

“Careful analysis of the metal employed shows a content and texture unlike the crude metal that we thought might have come from the Tucson mountains or some other place nearby. The metal is strikingly similar to common type metal. Imbedded in the side of the first cross that was found is a piece of copper ore that is classed by mining experts as ore from the Bisbee district.”