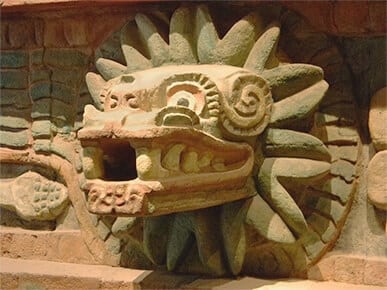 Quetzalcoatl, “the bearded white man” whom the Toltec Indians of Mexico worshipped as their god, may have been Israel III, leader of the mysterious wanderers who are believed by some to have left the leaden artifacts recently unearthed near Tucson.

That was the suggestion made by Mrs. Laura Coleman Ostrander, history teacher in the public schools of Tucson, in an address this afternoon before the American Association for the Advancement of Science.

After tracing Roman-Jewish history as “a possible cause for migration” of the unknown band, Mrs. Ostrander discussed the “cultural impress” of the wanderers upon the natives they encountered in America.

“In so far as the Latin records show the period of occupancy on this continent must have been about 125 years,” Mrs. Ostrander said. “It would be impossible for a civilized people of so much higher plane to have had contact with the natives whom the Scribe designates as ‘a people ruling widely,’ without having left some cultural impress. In the time allotted to me I cannot consider in detail each possible influence but may merely point the road of our investigation.

“The general consensus of opinion among archaeologists and ethnologists is that from 700 to 900 A.D. the Toltecs were ascendant in the plateau sections of the mid-Americas, moving from the north into Mexico and establishing their kingdom at Tolan. This date coincides closely therefore with the occupancy of these Roman Jewish immigrants. During the period of 125 years of contact with the natives, these wanderers must have left some material impress upon them, which may be recognized.

May Be Banished King

“To their god, Quetzalcoatl, ‘The bearded white man,’ who was first known as high priest and after death exalted and worshipped as their God, they attribute their forms of religion, government and superior craftsmanship. In the Toltec sculpturing he is always represented as bearded, with high forehead, long nose and thin lips and is often referred to as, ‘The Long-nosed God.’ He wears a Roman tunic embroidered with crosses.

“In the Dresden Codex, Quetzalcoatl is described as tall, blue-eyed and bearded, and in one of the drawings of the same manuscript he is shown holding a snake in his hand. May not this bearded white man be the banished king, Israel III?

“Toltec tradition further relates that while their country was at the height of its prosperity under Quetzalcoatl’s wise rule, there appeared one day before this high priest a bearded old man of his own race. Coming from the north this visitor revealed what the Toltecs believed to be the will of the Gods that he should return to his own people. This message he accepted as imperative and immediately started northward. He took with him some young noblemen as far as Cholula where he sent them back charging them to say that he would return at the head of a group of white men. Gradually news seeped through that Quetzalcoatl had died, but because of this message, the Aztecs, descendants of this ancient tribe, received the Spaniards as long expected guests. A study of the Toltec religion shows it to be a mixture of Indian myth and Hebrew legends and religious rites, but fundamentally Hebraic. The Toltecs had a hereditary priesthood who crowned their kings, they burned incense, offered fresh fruits as substitute for human sacrifice, attributed to Quetzalcoatl, and many other rites pointing to a Hebraic source.

“The establishment of a civil calendar of 365 days which was independent of the religious calendar and leaving to the High Priests to determine the time for intercalation of the extra days required to fill out the year, is an institution established at a meeting of the High Priests at Tolan, called together by Quetzalcoatl and agrees with the prerogative conferred upon the Sanhedran by the Jews.

“The cross is found sculptured upon many temples and is seldom found without some representation of the serpent.

“Chornay, while excavating at Palpan brought to light a Toltec house recalling in minute details the Roman impluvium–another unearthed at Teothuan by the same party was almost identical to the first. Lord Kingsborough and Thorogood spend many years in trying to establish the fact that the American aborigines are descendants of the lost tribe of Israel. They found overwhelming evidence pointing to Hebrew cultural influence but failed to establish their hypothesis.

“It must not be inferred that we assert that Israel III was the Toltec God Quetzalcoatl. We have simply raised the question of what became of him after he had liberated the Toltezus (Indian chieftains). There are those among eminent ethnologists who believe that the American aboriginal cultures are purely indigenous. In face of the great volume of evidence gleaned from diverse fields of investigation in recent years pointing to exotic influences impressed upon the lower aboriginal cultures their position seems very much like that of a person who once having cast a die, sees it through regardless of later developments.”

Regarding the “European background” for the supposed expedition to “Calalus,” the unknown land, Mrs. Ostrander said:

“Roman-Jewish history shows us a possible cause for migration. From Alexandria, drawn by the lively commercial intercourse between cities, there migrated in the second century B. C. a large colony of Jews, who established themselves on the right bank of the Tiber where they lived as traders. They identified themselves with politicians and as early . . . held offices of power. While some were building up their tracts of land, others moved with her armies into the northern provinces and established in these countries colonies of Hebrews who later occupied numerous high places in the governments of their adopted lands and whose descendants returned as foreigners to Rome to help in the usurpation of her power.

“The history of the Jews in Rome is one of great prosperity. The trade in slaves from northern Africa brought them great wealth. Their status as citizens depended directly upon the rulers in power. Under some they were treated justly, others allowed them great privileges while others persecuted them. During the fourth century Rome suffered much from the invasion of barbarous tribes and in the midst of these invasions and the political convulsions naturally entailed, the Jews gradually became masters of the commerce, for which the conquerors cared nothing. This place they held during the following centuries.

“It was given to them without protest by Honorius, Theodoric and Pope Gregory I and thus they gained peace, time and strength. During the reign of Gregory I they did much for their fellow countrymen in Southern Greece who were constantly at war with the Greek people. From the death of Gregory in 604 to the 9th century the years were dark and turbulent for the Jews. They could not own property, were forced to pay heavy taxes and to become wanderers. Their troubles were culminated by Ludwig II, who in 855 ordered all Italian Jews to leave the country by October 1st of that year. Even those who had been baptized as Christians were very similarly treated, for they were always suspected of pretending Christianity to avoid the heavy taxes levied upon Jews. It is not surprising then but rather a confirmation of a fact that many of them left Rome to seek new homes and not surprising that considering their knowledge of navigation, they should have sought them in a strange land.

“One definite link with European history is the story told by O.L. of the Hebrew ruler Benjaminus, who ‘Came from Seine to Rome, the bravest of the Gauls. He came to the assistance of the people, to lay the foundation of the city. He built a wall around the city to resist the enemy. Benjamin, mighty in strength. He filled the multitude with religion. He was slain by the Thebans.’ Thus his story comes to us from O.L. who ‘heard this from his father 500 years after, behind the mountain, in memory of his father, Joseph.’

“The story of Benjamin is very probable. Since this inscription is dated 895, the incident related must have occurred during the fourth century, and it is during these years that the northern peoples began to overrun the Roman Empire, and during these centuries that the Jews and Greeks throughout the length and breadth of the Roman Empire were at constant warfare, and many Jews were killed by Thebans. If the European background is correct, let us hope to definitely locate Benjamin. From the European setting we turn to the American.”

Mrs. Ostrander closed her address by stressing the importance of the Tucson discoveries and paying a tribute to the two men responsible for them:

“To date, the record carved upon these leaden, cruciform tablets comprises the earliest definite record of old and new world maritime intercommunication found in the new world.”

“When excavations are complete a monument made from the flood-washed boulders covering the place of burial will permanently commemorate the struggle of these Romans to found a nation while working against great odds, and paying tribute to the men who, through their energy and purpose, have made this discovery known, Messrs. C. E. Manier and Thomas W. Bent.”

Note: Laura Coleman Ostrander was a high school art teacher, born Dec. 12, 1890, died July 11, 1942. Her parents were B.A. Coleman and Alice Kowgill. She was buried in Evergreen Memorial Park in Tucson. According to Cyclone Covey, “Mrs. Ostrander, a tall, impressive woman, had transferred to the University of Arizona from Spearfish Normal School in South Dakota to take a degree in education with art and history minors, then gone on to art-history study at U.C.L.A. and two years in the Art Institute of Chicago. Her Preliminary Survey of these first thirteen artifacts discovered before May 1925 demonstrated her advanced powers of analysis and provided translations of the texts…she concluded that the texts presented a consistent account, agreeing with the pictured symbols, which also pointed without exception to Roman Jewish origin” (Calalus: A Roman Jewish Colony in American from the Time of Charlemagne through Alfred the Great, New York, Vantage Press, 1975, p. 82).