Byron Cummings Was Fooled Once (The Old Pueblo Chronicle, Tucson) 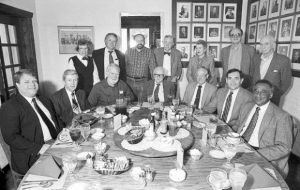 Dr. Byron Cummings (OPC), professor of archeology at the University of Arizona, Director of the Arizona State Museum on the UA campus, and President of UA, was famed world-wide as an archeologist but once he became the victim of a Tucson hoax.

Cummings was an instructor of languages, Greek and Latin, and Dean of Arts and Sciences at the University of Utah. He came to the UA in 1915, and rose to its presidency in 1927. He had discovered ancient temples in Mexico and early Indian ruins in this country.

In September, 1924, two Tucson men, C. E. Manier and T. W. Bent, discovered artifacts made of a metallic alloy of lead in an old lime kiln near Silverbell road, north of Tucson. They brought several items of crosses, swords and spears to Cummings. The artifacts were engraved with Latin and Hebrew words.

Cummings and other UA scientists determined that the objects were made prior to 1539, the coming of the Spaniards to this part of the world. They bore different dates ranging from 560 A.D. to 900 A.D.Cummings was confinced of their authenticity, as was Dr. A.E. Douglass (OPC) and Charles T. Vorhies (OPC), UA scientists.

If they are authentic, they would “wholly upset American history,” because they were thought to have been carried to this locality by an unknown band of Roman visitors.

The artifacts were displayed in the state museum. The university planned to buy them from their discoverers. The UA appropriated $15,000 to continue excavations at the site.

But doubts began to arise in the scientific world. In 1926, Dr. Frank Fowler, nationally known architect, charged that they were a hoax. The engravings on the pieces, he said, were copied material. Inscriptions on the crosses, he said, could be found word for word and often in the same chronological order in various books on Latin grammar.

In 1928, Harvard archeologist Dr. G. C. Vaillard called them fakes. He said, however, that the “Explanation of their discovery under a heavy layer of caliche presented an archeological problem.”

There were other charges of fakery from the scientific community. Embarrassing doubts began to form in Dr. Cummings’ mind and finally in January, 1930, he concluded that the discoveries were fakes. He wrote a memorandum to the state, recommending that the relics, still on display in the museum, not be purchased. Holes had been cut into the hard caliche and the relics had been inserted. One hole, holding a piece of a spear, was longer than the fragment itself. One cross, originally thought to have been carried by the visiting Romans, weighed 64 pounds, a burdensome piece too heavy to be carried on a march. The most devastating pieces of evidence were that the metal was found to be similar to a common present-day alloy and imbedded in the side of a cross was a piece of copper ore, classed by mining experts as coming from the Bisbee, AZ area.

Cummings was chagrinned but not permanently turned away from further archeological discoveries. He continued to discover and explore ancient Indian ruins. He died in 1954 in Tucson at the age of 93.

Lori Davisson, head researcher at the Arizona Historical Society, says that occasional requests still come from outside of Arizona, asking for information on the “Roman” artifacts. There is little more that she can offer. She says the Manier and Bent descendants, now living in California, say they know nothing of the location of the relics.

Neither apparently, does anyone else.