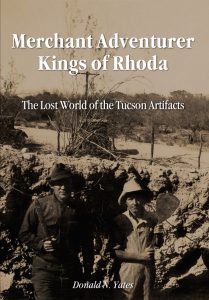 LONGMONT, Colo., March 28, 2018 /PRNewswire/ — Since they came to light nearly a hundred years ago, the Tucson Artifacts with their Latin and Hebrew writings have been branded a madman’s forgeries, though no forger has been discovered. The University of Arizona refused to accept the hoard of inscribed religious objects from Calalus for the Arizona State Museum, calling them “manufactured history.”

They went instead to the pioneer heritage museum across the street, where they are exhibited as local curiosities in donated jewelry store cases.

But the Arizona Historical Society Museum may have inadvertently acquired the most valuable historical documents in America, according to Donald N. Yates, a medievalist in Colorado.

His new book from Panther’s Lodge Publishers contains 346 pages and 30 illustrations, as well as original news reports and ancient texts relating to the artifacts. Linking the finds to the region’s early turquoise mining, it refutes the refuters with a mass of evidence, ranging from Jewish merchant charters and Arizona mineral surveys to an Indonesian shipwreck dated 838 and dynastic records from pre-Columbian Mexico.

The first Western Europeans evidently crossed the Pacific Ocean following an extension of the Spice Trade Route to China by at least 560, the first date mentioned by the artifacts.

Rhoda, the Toltec Indian trade center they took over, was “approximately Tucson, then called the Red City, Tlapallan, the home of Quetzalcoatl,” says Yates. “During Passover that starts this week and on other high holy days, we can imagine Hebrew prayers drifting down at nightfall from the tombs of Jewish kings on Tumamoc Hill.”

“It’s all rather incredible,” says Teresa A. Panther-Yates, president of Panther’s Lodge. “If one-tenth of the history recorded on the artifacts can be verified, it completely shatters what we thought we knew both about ‘Indians’ and early medieval Jews.”

Merchant Adventurer Kings of Rhoda: The Lost World of the Tucson Artifacts is available wherever books are sold, with a list price of $19.95. A Kindle version can be downloaded on Amazon for $9.95. Google Play offers an ebook for $7.96.

Donald Yates lives in Longmont, Colorado with his wife Teresa. It is his twenty-second book.