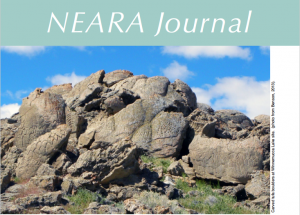 Robert Heine-Geldern estimates that voyages from India reached directly into America from as early as the 2nd century C.E., in other words already in Roman times. The year 200 marked the completion of the Mishnah and a high point both for Judaism as well as the Roman Empire. From that period date apparently the Calixtlahuaca Roman head brought to light in Central Mexico in 1933 and the Roman brick mason marks identified at Comalcalco in Tabasco. According to Sorenson and Johannessen, a short list of plants with decisive movement from the Americas to India during the ensuing centuries includes agave, evidence for amaranth,milkweed, annatto, chili pepper (by 800 C.E.), certain squashes, arrowroot and basil. It was a Golden Age for world exchanges, those of a biological nature as well as cultural. The year 500 corresponds to the first securely dated travels by Asians, five notable Buddhist monks, through Western Mexico and the U.S. Southwest (Vining).

The Tucson Artifacts bear reliable dates in the Christian calendar of 560, 705, 775, 800, 880, 885, 900. As demonstrated in my recent book, Merchant Adventurer Kings of Rhoda: The Lost World of the Tucson Artifacts, they document the annals and prosopography of a distinct geopolitical entity, a Roman-styled military kingdom in Chichimec Toltec Mexico with Jewish leaders from Brittany, the Carolingian or Frankish heartland on the Seine, and Gaul, one that existed for over a century (790-900). They are straightforwardly composed in Latin, the official language of records during the Middle Ages. They are plainly written in a script intended for public scrutiny. The circumstances of their manufacture from local lead and their recovery from the desert soil localize them to the place where they were excavated. Finally, they are perfectly preserved, complete, unaltered. They are official records, recognizable as being signed and sealed by a notary (OL). They do not have to be reconstructed, pieced together, deciphered or dated. Further,their context is completely understandable by reference to the Toltecs, a two thousand-year-old advanced civilization whose name they mention, and whose commercial conventions they replicate, down to seal script trade emblems and spattered ulli-drops referencing Quetzalcoatl, the god of merchants (pp. 161-65). The present article attempts to place the makers of the Tucson Artifacts, who call themselves Romans (Romani), in the cultural context of pre-Columbian history.

Indigenous peoples are described by our Romani as Toltecs (Toltezus, 1A, 5A). It is the first appearance of this word in the historical record, predating such chronicles as Tovar by more than five centuries. The subject peoples whom the Toltec governor/overlord (silvanus, si’wan, “Elder Brother,” swami) rules over are called Toltecs. We are not told what the name of the people that the army of Theodore conquers was. After their subjugation they would also be considered Toltecs. They appear to be the Calalus (“people of the wasteland”), or Hohokam. In the Latin of the artifacts, both Toltezus and Calalus are indeclinable plural nouns adopted from a foreign language very dissimilar to any Indo-European tongue.

Who were the Hohokam? Though their immediate or ultimate origins are somewhat hazy, the settled opinion of archeologists is that they formed a frontier group from Mesoamerica totally unlike the surrounding tribes at the beginning of what is called the Pioneer Period, about 700 (Whittlesey). According to the most recent research, the Toltec Chichimec intrusion into Hohokam lands around Tucson and Phoenix lasted from 560-900 (the same inclusive dates of the Tucson Artifacts). It began as a regional diffusion of Purépecha (Michoacán) or Tarascan Culture via trade routes along the Sierra Madre Occidental and up the coasts of Nayarit, Jalisco, Sonora and Sinaloa (Pioneer Period). After 900, some of the Toltec Chichimecs, who had blended after several centuries with the Hohokam of Arizona and Chalchihuites in Durango and Zacatecas, returned southward and founded Tula in Hidalgo. Cultural influences were now reversed, with Kokopelli, Quetzalcoatl and cliff dwellings diffusing southeasterly out of Tlapallan, the Red Land, Chichilticalli (Great Red City of the South) or Rhoda (approximately Tucson). Perhaps the best description comes from Albert Schroeder, who followed the diffusionist approach of Charles Di Peso, the Amerind Foundation director who published many volumes on the Mexican trade center Casas Grandes. According to Schroeder, Hohokam civilization in the Southwest arose from the mechanism of the diffusion of trading families from a “heartland” located in the Pacific-facing regions of Michoacán, Jalisco, Nayarit and Colima far to the south. This view regarding Hohokam origins was first formulated by Harold Sterling Gladwin, the excavator of Snaketown.