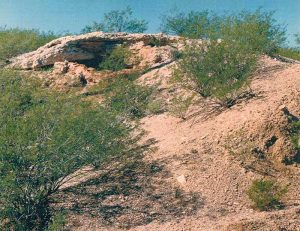 Many Scientists Present at Excavation of Newest Silverbell Archaeologic Discovery; Dean Butler Attests to Fact They Are Not ‘Planted’

Imbedded in caliche and gravel that apparently had been undisturbed for hundreds of years, two fragments of a leaden spear-shaft were found at the third lime kiln on the Silverbell road, seven and a half miles from Stone avenue and Congress street by university scientists yesterday.

The site of the find is the same as that of numerous leaden artifacts, said to be of pre-Columbian origin, which were brought to light about two and a half years ago. The tract is the property of Thomas W. Bent and Charles E. Manier.

The lead shaft was encountered Wednesday afternoon by John Hand, who is conducting excavations at the lime kiln for the University of Arizona. The artifact was permitted to lie in place until it could be extracted from the soil by university scientists.

Yesterday morning, the shaft was taken out by Dr. Gordon Montague Butler, dean of the college of mines and engineering of the university.

Dr. Butler declared that the overlying soil gave no evidence of having been disturbed recently.

“Even if we accept the hypothesis that the soil was washed down by the rains, it is ridiculous to contend that the objects were buried there within recent years,” Dr. Butler declared. “There is no evidence of burial or recent disturbance. To have ‘planted’ the soil in place would have necessitated moving tons of it at a time.”

Commenting on the significance of the find, Dr. Cummings yesterday made the following statement to the Arizona Daily Star:

“The two fragments removed today were found at the same horizon level as those excavated two and a half years ago. There are indications that they were washed down with the soil to their present position.

“A few feet from the two fragments we have found three other pieces of another spear. These three pieces were several feet apart. One was discovered two and a half years ago, when the original find was made: another last summer, by Mr. Manier, and a third, the other day.

“Since none of these spear fragments bear inscriptions there is no direct evidence to be had from them as to their antiquity. But I regard as significant in this connection Dr. Butler’s observations regarding geological evidence of antiquity. His conclusions, of course, I accept.”

The fragments were found five and one-half feet below the surface of the ground.

Manier, one of the owners of the property, resides at 1722 East First street. Bent has a home on the property itself.